“NEVER GIVE UP NEVER SURRENDER!” by Tiffany H

This has been our family motto since I was little and I don’t think I fully understood its’ meaning until last year. Before I get to that, let me tell you a little about myself. I’m probably considered a geek/nerd. Our family motto came from my dad’s deep love of Star Trek that I now share. We all found galaxy Quest hilarious and sweet. I grew up as one of the first gaming generations where systems were releasing every other year (started on Atari, then Nintendo, then SNES, Sega, Playstation, etc). My family loved niche movies like “Willow” and “Princess Bride” that at the time weren’t very popular. I played World of Warcraft for several years, and really enjoyed raiding and PVPing with friends I made online. I still play Diablo III and plan on returning to WoW with the newest expansion in August. I tend to binge watch shows with AmazonPrime, Netflix and dramafever (korean dramas!) as opposed to watching live TV. I’m a sucker for sci-fi, fantasy and superheroes. I lean towards Marvel, but love DC as well. I’ve been reading since I could hold a book on my own. I drove my friends nuts when we first watched Harry Potter and The Lord of the Rings and pretty much any movie based on a book that I read: “Well that’s not true to the book. Argh!” but learned to love them separately from the novels. 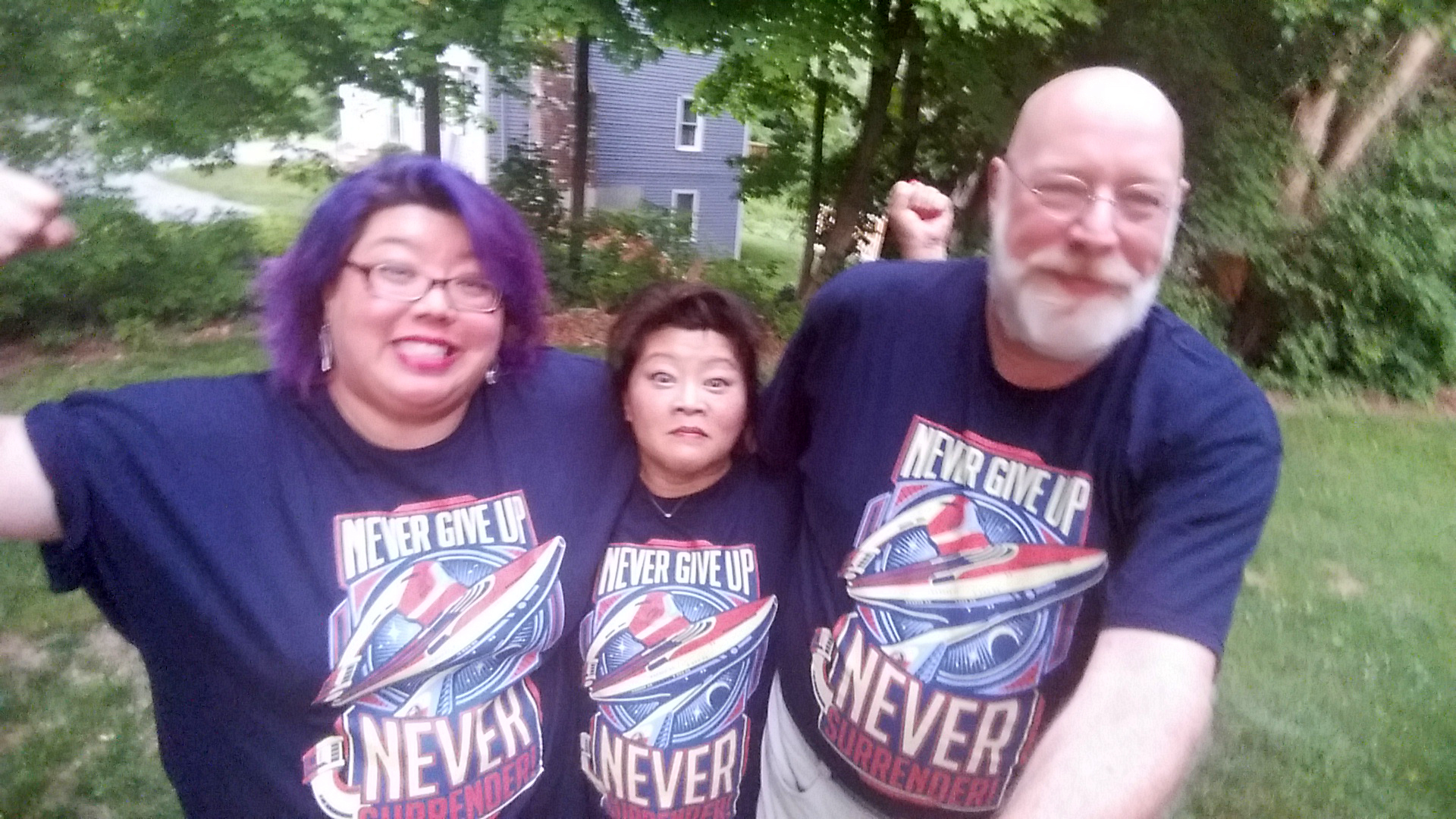 “Me and my biggest cheerleaders, Mom and Dad!”

Last year, I was a month shy of turning 37 when I had to have surgery to remove a large, plum-sized tumor from my large intestines. During surgery, they discovered it had spread to my liver and I woke up to be told it was stage IV colon cancer. For those unfamiliar with cancer, there are only four stages; it was a shock, to say the least. My parents were devastated. Mom was sobbing next to my hospital bed, my Dad was quiet, and my brother was at the foot of my bed giving me a tremulous smile saying it would all be okay. The surgeon apologized and held my right hand. He said “Don’t worry. This is a slow growing cancer. You probably have 3-5 years.” I glared at him, thanked him, and then dismissed him. When he left, I asked my dad, “Did that man just say that I am dying?” My dad replied, “Yes, he did, but we all are really, so what are you gonna do about it?” I said, “Tell him to drop some 2s or 3s in front of those numbers. I’m not dying just yet.” Never give up. Never surrender.

Two weeks later, I was in surgery again and then started chemo two weeks after that. For someone who previously had a fear of needles, they are nothing to me now. Poked, prodded, bruised, cut open, pshhhht. Easy peasy. I would sit for five hours on a Tuesday to get my chemo. Go home with a 48-hour pump, go to work for a day and a half, and then get my pump removed on a Thursday afternoon. Was it easy? No. Chemo is cumulative so the effects worsen the farther along you go. I always thought people just got used to it, but it actually gets much worse. Its the people that get stronger. Eventually, my hair thinned, I had a chemo rash all over my face and torso, and the nausea was almost unbearable. Through it all, I would always find a way to smile and tell my parents, “Never give up! Never Surrender!”

My grandmother had cancer and she used to tell my mom that she envisioned little soldiers fighting. Her team was white, the cancer was red, and she’d send her soldiers in to go fight. I was told visualization is a really good way to help you mentally through this. My visualizations included my WoW characters. Throughout chemo, I would “send in” my fire mage Tanwyn to fireball and pyroblast any tumors and cancer cells she could find and “send in” my holy paladin, Bibimbop, to keep Tanwyn protected and heal up the burns I would envision her leaving behind. It seems silly when I write it out or tell someone about it, but when you’re sent home with a 48-hour pump full of poison that is being injected into you, these little daydreams help you meditate your way through it.

Every other week, I’d cheer NEVER GIVE UP, NEVER SURRENDER! as I would leave for chemo. My friends keep saying that they just don’t get it: “You always seem happy. You’ve never once complained or said “why me” or any of those things that I would’ve said. You’re facing all this BS with your port, and your response when asked about it was, “Meh. Bump in the road.” What is wrong with you?” I laugh because of course I’ve had angry thoughts and sad thoughts and have been scared I won’t be here to see my newborn niece’s first crush, introduce her to Harry Potter, Tolkien, Star Trek, and Wonder Woman and the Avengers and and and…but I prefer the positive. I grin like a fool and think about Tim Allen laughing as he tells his crew, “Never give up! Never surrender!” and apply that to my everyday life.

After 7.5 months of chemo, I achieved “Chemo Holiday” — there was no evidence of disease via MRI scans on my liver and my blood work came back clean. Just in time to enjoy the holidays! I had a wonderful six, almost seven, months of chemo holiday before my numbers began to change. We are in the midst of prepping for more chemo and although the MRI’s are clean, the blood work says cancer is having a ball inside my body, so it’s back on chemo to teach this cancer a lesson. “Never give up! Never Surrender!”

Recently I bought “Never Surrender!” by DeepFriedArt for my main support group: my parents. We took some selfies and posted them to Facebook. My friends said they’re ordering their own so they can be on Team Tiffany. The best part is, I know that they already are. 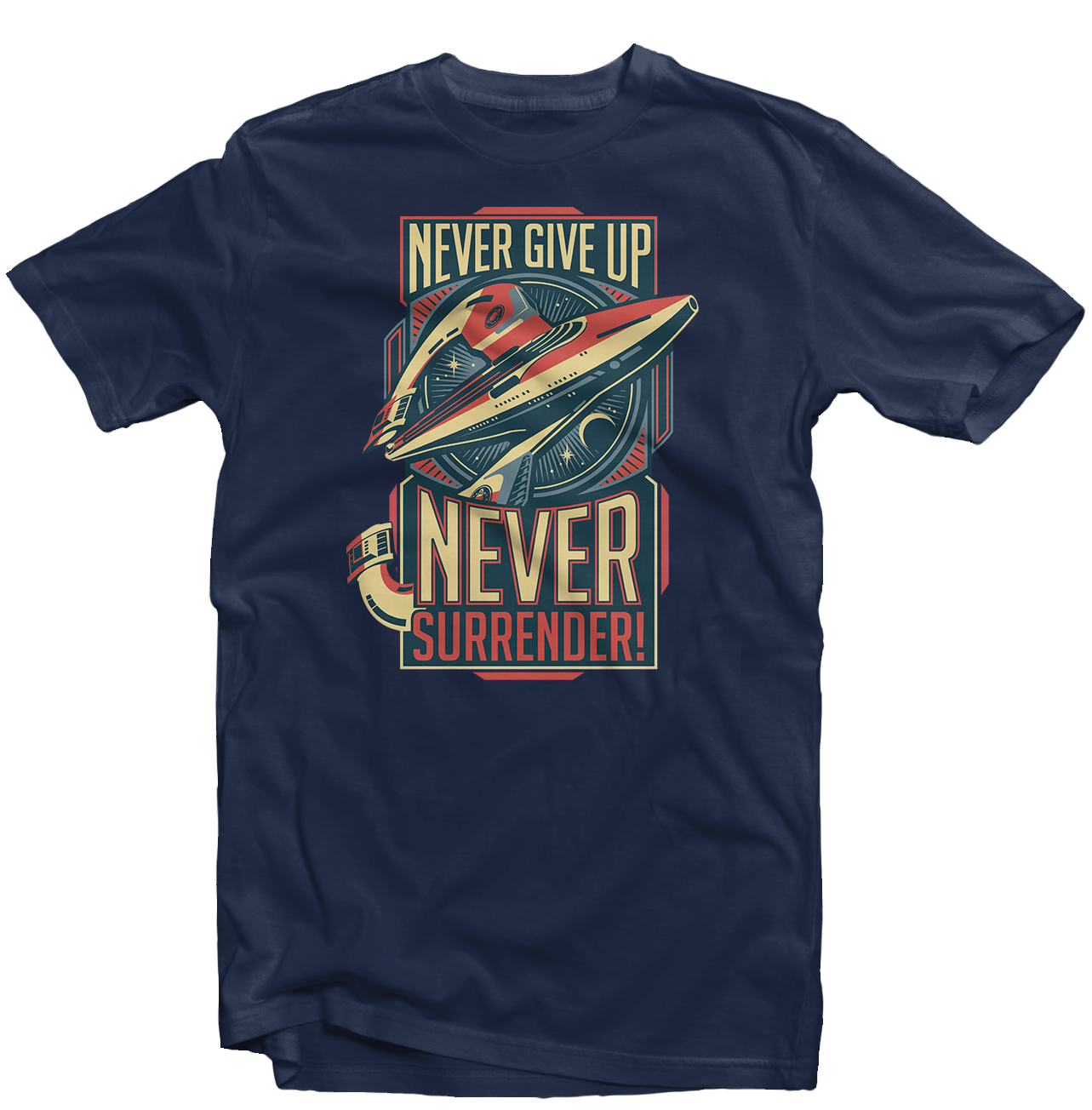